If I asked you to think of Queen Victoria, how would you picture her? I bet you saw her as an overweight old woman in a big black gown, right? Well, you wouldn’t be wrong, but that’s not always how she looked.

As a young woman, Victoria looked very different to the second half of her life. We all know how she mourned the death of her beloved husband, Prince Albert, for forty years! Despite being an arranged marriage, Victoria and Albert did have a lot of love for one another. Together they had nine children, including the future King Edward VII.

Queen Victoria isn’t considered the most fashionable monarch there has ever been. In fact she was considered pretty unfashionable, especially by the French. When she visited France on her first state visit in 1843 her lady in waiting, Charlotte Canning, would constantly complain and become frustrated at the lack of care Victoria took with her style. Standing next to the beautiful Empress Eugénie of France, the twenty-four year old British Queen looked outdated and old in her bonnets.

Victoria’s fashion was seen as in your face due the many bold decorations her gowns would have. She was a big fan of embellishments of flowers, lace trimmings, and loved to have diamonds sewn into her dresses. People around Victoria often described her style as loud. Her German dresser, Frieda Arnold, has been noted as saying that the Queen had a preference for pink or blue ball gowns. A very different image than the one we all know of Victoria.

The way her clothing was made was incredibly important to Victoria. She wanted her clothing, and the clothing of her courtiers, to be British manufactured. Her wedding dress was no exception to this. Victoria wore a gown made of silk that had been woven in Spitalfields, East London, and Honiton lace that had been hand-made in Devon. Probably the most fashionable thing Victoria did was on her wedding day. Before her marriage to Prince Albert, wedding dresses were usually made from silk, gold or silver threads. In medieval times they were often blue to represent purity like the Virgin Mary. Victoria chose to wear a gorgeous ivory gown which set in place a brand new tradition we still follow to this day. Since her wedding in 1840, the most popular colour of wedding dress has been white, all thanks to Vicky.

The Queen had a large collection of jewels, often received as gifts from other monarchs. This included rubies, sapphires, diamonds, and emeralds. The one she wore the most was the beautiful blue sapphire brooch she received from Albert on their wedding day.

When visiting Ireland she wore a gown made from green Irish poplin as a way of showing solidarity and unity with the country. To a ball in Ireland she wore a pink gown decorated in gold shamrocks. Scotland was no different. After traditional Scottish Highland apparel was banned by King George II in 1746, then that rule being abolished by King George III in 1782, it was very important for British Monarchs to show their support of the Scottish people. King George IV was the first monarch to visit Scotland after the ban of traditional Highland clothing, he wore the full get up, including kilt. Victoria was a huge fan of Scotland, even buying a castle there, Balmoral. The Queen would often wear traditional tartan when visiting the country.

After the death of her Husband, Albert, in 1861, we know that Victoria entered a state of mourning which she would never leave. Her style and clothing changed dramatically. Although never being the most stylish person alive, Victoria’s new style became less trendy. Victoria adopted a shapeless black gown which made her look round and stout, after all she was only 4ft11”. This outfit was considered the ‘widows uniform’. The silhouette of her new style stayed the same for forty years until her death in 1901. Until Elizabeth II, Victoria was the longest ruling British monarch with sixty-four years on the throne. 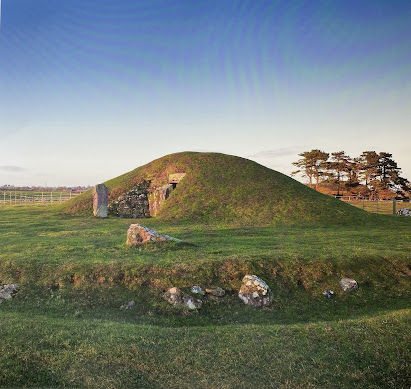 Photo credit: Cadw 2021 calendar  Bryn Celli Ddu means 'Mound in the Dark Grove' which is a fitting name for this site. Located on the Welsh island of Anglesey, stands this incredible prehistoric site. Although it might not look like much from the outside, this prehistoric site has been of archaeological interest for many years. Its purpose, like many others on Anglesey, was to pay respect and protect the remains of ancestors.  The burial chamber has been investigated a number of times with the first serious exploration taking place in 1865 with excavations later taking place in 1928-29 which revealed a lot of details about the history of the site. I can only imagine how exciting it would have been to be part of the team that excavated the site! Appearing to have originated as ritual enclosure around 5000 years ago, the chamber has a long history with items such as human bones being found in the passage to the tomb. Perhaps most interestingly, the bones were found both burnt

The impact of the 1926 General Strike on Welsh coalfield communities

Photo credit: Leonard Raven-Hill, Punch Magazine , 19 May 1926.    The General Strike began on 3 May 1926 and lasted until 12 May 1926. The purpose of the strike which was implemented across the UK was to force the British government to prevent wage reductions and worsening conditions for miners. The TUC (Trades Union Congress) called for the strike and around 1.7 million men in transport and heavy industry took part. When the TUC called off the strike on 12 May and other industries were calling their workers back, the miners were left to continue the struggle by themselves. The lockout that started as a result of the strike became a war of attrition, which unfortunately, the miners were destined to lose. The British government had sensed that there was a strike brewing several months before it did in May 1926, and during that time had been stockpiling supplies and called on middle-class volunteers to pick up some of the essential work of those who took part in the strike. There were a